A CHANGE IS GONNA COME

There's so much happening in the world right now. As we all try to grapple with systemic racism in this country, we are still dealing with a pandemic - all while trying to determine whether it's safe to leave our homes as states begin to open up. I do feel somewhat hopeful - with people marching in the streets, having difficult discussions, turning inwards and real learning happening - through the stories of centuries of oppression - and still so much work to do. In many ways, the work has only just begun. It does feel overwhelming. And very raw and emotional. I've been engaged in conversations in every organization and circle I am honored to sit in - discussions about dismantling structures, assumptions and navigating ways forward.

It's in this frame, that those of us who create find ourselves. For me, I have a hard time separating my creative from my activist side. When the album release came on June 6, I decided to donate 30% of all purchases off my web store, $3 for every album purchased on iTunes or Spotify, and $10 of ever Direct-To-Vinyl Session album until June 19 to Fair Fight Action to ensure a free and fair election in November. Few may know that before I found the labor movement, I worked on voter rights and reform in New York City.

In just under two weeks, we've raised more than $200. There are two more days to go. I hope you will all consider helping me raise the money. If you already have bought merch or a CD or a download, please consider going to Fair Fight and donating directly. We have so much work to do.

In other news, I've been pretty busy besides releasing the album, so a few updates: 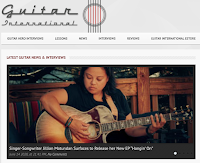 I recently was featured in Guitar International Magazine. I'm still pretty amazed myself.
And finally, there are some shows coming up - yes, live ones (outdoor and socially distant, of course)! Be sure to check them out here.
So much happening. And I thank you for being a part of this. Now go on out there and keep fighting for all that you believe in. And I hope you continue to be well and safe.