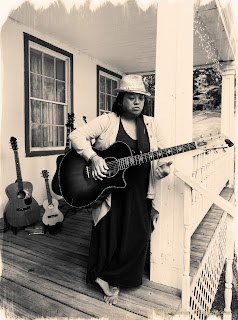 Where did the time go? Honestly? I'm so far behind in updating all of you and I'm sorry for that. Pandemic has been a challenge for all of us, and one is how quickly time continues to march on despite us pretty much staying in place for nearly a year now. But I've been very, very busy over here! As many of you know, I have a full-time job. But I'm still trying to stay in my creative space as much as I can when I'm not working, doing songwriting workshops/retreats, and I have been doing a lot of collaborating with other musicians and artists as well as writing new music and hatching plans for the rest of the year.

By the way, thanks to all of you, we raised $750 to Fair Fight Action, which you may have heard of a lot in the last couple of months since the U.S. Senate runoffs in Georgia. It mattered!

So, here's what I've been up to, along with the video to prove it (this might be long, so grab a cuppa something and buckle in, but it'll be good, I promise):

At the end of 2020, got some good news: I won three awards at this year's Mid-Atlantic Song Contest presented by the Songwriter's Association of Washington for:

Check out the full results here

I spent the last quarter of 2020 hanging with many other musicians and that was honestly really great for me. I was not fully in a creative space all the time, so being able to play music did a lot for me, especially after the year we had:

Livestreaming is the thing these days and boy, did we learn how to do that quickly! Besides a large number of open mics, I did manage to livestream a couple times and even managed to livestream a few of my live shows:

Phew! I will promise to update more but I think you can see why I haven't had time to!

There's a lot planned for this year and I promise I'll get more information out to you as it develops - I know, it's already February! Crazy!

Thanks again for all of your support!