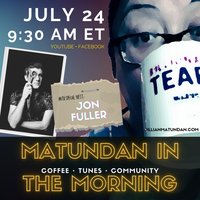 July 2022 Matundan in the Morning with special guest Jon Fuller

The next installment of Matundan in the Morning with special guest, Jon Fuller! 9:30 am ET, Saturday, July 23. Stream in on Facebook, YouTube, or on my website. Coffee, music, community. As always, throw requests - anything can happen! See y’all then!

Jon Fuller didn’t go into 2021 expecting to record a full-length album. Long-hauling from a covid-19 infection that started in March 2020 (he jokes, “I was on the vanguard for the first and last time in my life”) and trying to stay busy, he reached out to his friend Dan Kleederman (Grand Kid, Bartees Strange) to see if he’d be interested in working together on a few songs. Those “few songs” quickly became When Did You Get So Damn Scared, Jon’s most ambitious and honest work to date.

The 12 songs that comprise the album run the gamut from the personal (“Stepping Stone,” which chronicles an early adolescent same-sex crush and the dizzying heights and overwhelming lows it entailed) to the political (“Burn It Down,” a searing indictment of the rise of authoritarian strongmen around the world over the past decade), and each song is buoyed by the musical contributions of Dan Kleederman (guitar, additional production), Derek Swink (drums) and Dillon Garrett (bass). Though the album was recorded fully virtually, with each musician sending in their parts from their various homes, the result is still a warm, live sound.

Jon’s previous two albums, The Art of Denial and Skipping Away from Dissonance, received airplay on independent and college radio stations and were both featured on WVIA-FM’s end-of-year Best Of lists. Jon also was a 2020 Just Plain Folks first prize winner in the “Best Modern Rock Song” category for the song “Gathering Tide,” and his song "Time Machine" was licensed for promotional materials for the Broadway show Peter and the Starcatcher.