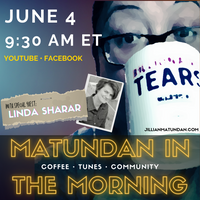 Matundan in the Morning • June 2022 with special guest: Linda Sharar

The June edition of Matundan in the Morning with special guest, Linda Sharar, June 4 at 9:30 am ET! I could not be more happy to be streaming with such a phenomenal singer-songwriter and human being as Linda is. So excited to spend time with her and get a front row seat to her brilliance! Read more about her below. Until then, see y'all Saturday for coffee, music, and community! Linda Sharar has been a presence on the Northeast singer/songwriter circuit for over 25 years. With three independently released CDs produced by Tom Dube (Richard Thompson, Julianna Hatfield), she has performed on stages of the top folk venues in the country, including Club Passim in Cambridge MA, the Iron Horse in Northampton MA, Godfrey Daniels in Bethlehem PA, Cafe Lena in Saratoga NY, the Bottom Line in New York City and Eddie's Attic in Atlanta. She has also appeared on stage solo or in collaboration with Camp Hoboken and the RESPOND collective at well known festivals including the Falcon Ridge Folk Festival in Hillsdale NY and the Kerrville Folk Festival in Kerrville TX. In recent years Linda has appeared annually at the Black Potatoe Music Festival each summer with the Sharar Sisters. Additional pop-up gigs by the Sharar Sisters have included the New Moon Coffeehouse opening for John Gorka and headlining house concerts primarily in the Tri-State region. Linda uses her creative gifts as a songwriter/performer to fund-raise for charities and special causes, and was instrumental in the success of the RESPOND I compilation, which raised over $150,000 for the RESPOND shelter in Somerville MA, and was hailed as the "Top album of 1999" by Billboard Magazine.