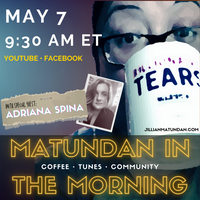 May 2022 Matundan in the Morning with special guest Adriana Spina

The next installment of Matundan in the Morning with special guest, Adriana Spina! 9 am ET, Saturday, May 7.

Y’all, I’m so excited to welcome my friend, Adriana, all the way from Scotland. You won’t be disappointed, I promise. Read more about her below. Coffee, music, community. As always, throw requests - anything can happen! See y’all Saturday.

"Reminiscent of a young Joni Mitchell, (Adriana) is gifted with one of those glorious aching voices that just don't come along too often... these are great songs performed with panache and passion." Acoustic Magazine

"The depth of the album comes through its easy transference from thoughtful, longing beauty to potent ‘no prisoners’ expression. The music progresses through reflective thoughtful acoustics to gutsy guitar drive, power-percussive statement...‘Let Out The Dark’ is a visceral statement." Folkwords.com

"Highly accomplished...Spina sits comfortably within the sphere of artists such as Mary Chapin Carpenter, her songs are modern folk tales set within arrangements that can be subtle or rock out with some finesse.." Blabber 'n' Smoke

Fiercely independent, she has worked hard to craft her blend of Americana, folk and country. With two studio albums to her name, Never Coming Home (2011) and Let Out The Dark (2017), Adriana continues to write and perform tirelessly. She is a regular on festival bills including Celtic Connections, Glasgow Americana and Butesong, and regularly plays across the UK. She had the honour of being invited by Joan Armatrading to support her on the Scottish dates of her most recent world tour, culminating in a storming performance at Glasgow’s Royal Concert Hall. Joan is just one in a list of high-profile artists with whom Adriana has shared stages, having also opened for acts of the calibre of Sheryl Crow, Paolo Nutini, Eddi Reader and Dar Williams.

Adriana's Christmas single Sparkle was playlisted by BBC Radio Scotland and selected by presenter Janice Forsyth who described it as a “beautiful” single of the week. Let Out The Dark was also made Album of the Week on its release by BBC Scotland's Iain Anderson. More raw and guitar-driven than its predecessor, Let Out The Dark features Ross McFarlane on drums (Texas, The Proclaimers, etc) is a collection of songs touching on themes from lost love and infidelity to atheism and the European refugee crisis.

Both of Adriana's albums were released on her own Ragged Road label and are available in a variety of formats from her website.

Adriana is currently working on new music, with a new album planned for 2023.