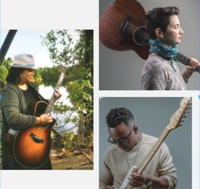 Jillian Matundan is an award-winning, singer-songwriter in Northern Virginia by way of Central New York, where she was trained in classical violin from the age of three. A self-taught multi-instrumentalist, she took a fifteen-year hiatus from writing and performing her own music. In 2019, she began playing songs she had only started writing a few months earlier at an open mic and has been on a tear ever since, winning awards and releasing her debut EP in June 2020. She plans to begin work on an acoustic and full-length album in 2021. More at: jillianmatundan.com Elena La Fulana is a singer-songwriter and leader of the DC-based bilingual Latin-folk band Elena & Los Fulanos. Originally from Managua, Nicaragua, Lacayo identifies as both American and Nicaraguan and her music, which ranges from twangy, heartbreak-themed folk Americana, to soothing, introspective, violin-infused Latin cumbia reflects this dual identity. Her band Elena & Los Fulanos has twice been nominated for a Wammie-award, and their most recent album, Volcán, was hailed as "a bilingual folk album for the resistance" by the Washington City Paper, a publication that also selected Elena for their People Issue 2017 highlighting notable Washingtonians. Most recently, Elena has begun touring with the Latin-Grammy winning and Grammy nominated band, Flor de Toloache. More at elenalosfulanos.com AND just added: opening act Nelly's Echo! Nelly’s Echo is based on the premise that music is a two-way street; “It’s a give and take.” Nelly refers to the musician creating the ambiance and & Echo refers to the audience’s response to, and appreciation of the ambiance. Nelly’s Echo’s captivating storytelling and high energy performances have made him a sought- after musician all across the United States and overseas.