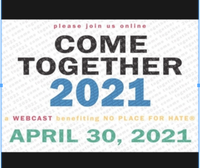 COME TOGETHER with performers from across the Lehigh Valley and beyond to support #NoPlaceForHate!

Anyone who donates to our GoFundMe campaign in advance of the show will get a reminder on April 30 with a link to watch the webcast: https://gofundme.com/cometogether2021

In addition, donors who give at least $10 by April 28 will get a chance to enter drawings for items donated by our community sponsors, including Godfrey Daniels, Touchstone Theatre, and the SouthSide Arts District. (For information about how to enter the drawings without making a GoFundMe donation, please contact cometogether@notforcoltrane.com.) Winners will be randomly selected during the April 30 webcast.

No Place for Hate®, a 21-year-old initiative of the Anti-Defamation League, supports programs in more than 1,600 schools across the U.S. to help kids combat bias, bullying and hatred. Our April 30 webcast raises funds for ADL Philadelphia's work supporting No Place for Hate programs in nearly 50 school districts in Pennsylvania, including many in the Lehigh Valley.

Please come together with all our performers to show that our communities are no place for hate!